RESEARCH: THE DOC ROWE ARCHIVE AND THE WHITBY PENNY HEDGE 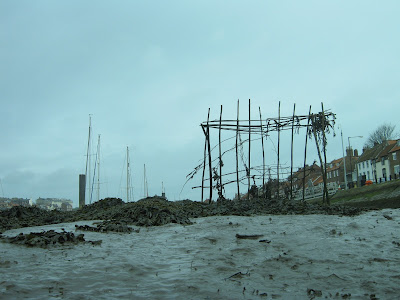 I spent a cracking afternoon in Whitby with Doc Rowe surrounded by his archive of vernacular music, performance, ritual and social ephemera. Doc's stories of great traditional singers, of recording and filming in the field and his insights into the relationship between the arcane and the present are punctuated by delves into envelopes and boxfiles. Out come copies of Peace News, advice booklets for Conscientious Objectors, proclamations and petitions regarding Franco's war on the Spanish republic, handwritten communiques from the Aldermaston marches,

photographs from Padstow and Abbots Bromley...Burry Men, men with horns. 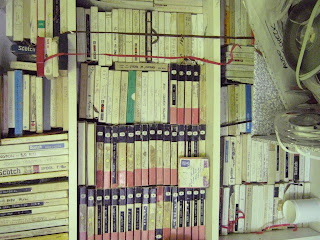 Doc didn't set out to collect and seems to take neither a curatorial or an editorial role. He described a common assumption in the early 60's that the music, the dances and the ceremonies had gone with the culture that produced and sustained them. It had been caught and recorded for posterity, but it was gone. Doc knew this wasn't so; the Archive, he said, came from a need to confirm for himself the continuing existence of this culture and he has amassed the evidence in miles of tape and film, great swathes of photographs and vinyl and mountains of reading matter.

There is no sense here of vitality pinned under glass, no hammering of awkward edges into a convenient shape. The Archive demonstrates that we still live in the world of the Padstow Oss and the Burry Man; a fluid and mutable world that can inspire and nourish independent thought in a confluence of magic, radicalism, anarchic wit and energy.
Doc currently has three Fine Artists working with him, each is exploring and interpreting the Archive; more streams joining the confluence.

I enjoyed my afternoon with Doc Rowe, and I'll be visiting again with this project in mind and to help Doc sort through some of the more distant corners of the Archive.
Walking back into town he talked about the need to respect and maintain the integrity of certain traditions and customs, and his concern that intimacy and scale might be lost in the drive to attract visitors. In his book "Mayday. The Coming Of Spring" he writes "These events have emotional and demonstrative significance that is seriously upheld; they are, mostly, not staged as tourist attractions and have in some cases survived despite external pressures"

As I write this from the Singing Kettle Caff in the harbour I know that under the waters of the Esk, just a few yards from Doc's Archive, is the Penny Hedge. I went for a look at low tide. This fragile-seeming waist-high structure of woven stakes is built annually on the eve of Ascension day, and must withstand three tides as recompense for the wrongs of three prominent local families in the 12th Century. No tickets are sold, no-one sponsors the event. There is no accompanying faff or ballyhoo other than a cry and a blast from a ramhorn, and then in this unassuming muddy patch of the estuary the Penny Hedge is left to stand unaided against the actions of the tides.

" Often the hedge from the previous year has to be taken down in order to build the new one, so effective is its' construction. Indeed, the hedge has never fallen and continues to be built to resist the strongest tide." ( Doc Rowe "MayDay. The Coming Of Spring" English Heritage / EFDSS)

Posted by BIFOCALS SEASONING at 12:49